I'm a daftee who owns another forum, and just wanted to pop in and say 'Hi'

As with most here, I'm very much into vinyl replay (although I also 'do' other sources). I love my music (anything from obscure electronica/ambient, to rock/pop, folk, classical and jazz).

Most likely I won't be a regular contributor (as helping run my own site takes up most of my time), but I may pop in now and then to offer some input.

All the best,
Marco.
Top

Hi - Flaty says his motors The best sports car ever - But it surely cant be better than your one can it.......

Dunno - I haven't driven his!

For me, sports cars should be judged more on how they drive/handle, than how they look, as with a sports car, it's all about (or rather should be about) performance.

Also, I don't class the Brabby as a sports car - certainly not an out-and-out one; more like a luxury cruiser (to make driving long distances as comfortable as possible), with a 'wee bit of poke' under the hood....

Hi Marco, nice to see you

I would agree with what you say about the Merc, it's more of a tourer than an outright sports car. As it happens, one of my friends has just bought (yesterday) a Ferrari 458 Italia - exactly like this one but with Ferrari badges on the front wings: 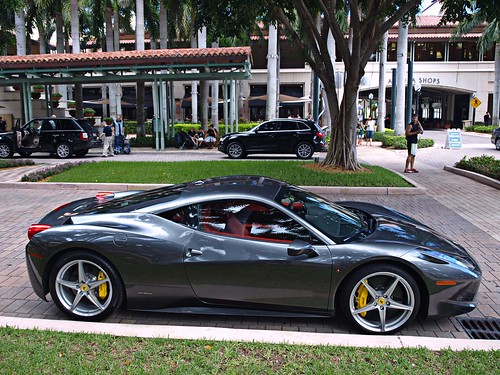 Like you I am very vinyl orientated but I believe you have become enamoured of the Raspberry Pi? I've built a couple of Pi music/video servers and they do work very well. I've even considered one for myself but I already have too many projects to complete

Nightmare. Sorry to hear about your friend, and hope he recovers soon. I'm looking forward to the show, as it was good last year, and better organised (IMO) than the other commercial shows. The rooms also seem to impose less of a restriction on the sound which the systems produce.


I would agree with what you say about the Merc, it's more of a tourer than an outright sports car. As it happens, one of my friends has just bought (yesterday) a Ferrari 458 Italia - exactly like this one but with Ferrari badges on the front wings:

Very nice indeed - now *that* is is a proper sports car!

For me, if you're calling it a sports car, it should have no more than two doors, two usable seats, and a roof that goes up and down.... I need the Merc to be practical too, for taking friends and family with us on trips abroad, or as the case was recently, touring around Scotland - and it ably fulfils that brief. It really eats up the miles in a totally relaxing and effortless way.


Like you I am very vinyl orientated but I believe you have become enamoured of the Raspberry Pi? I've built a couple of Pi music/video servers and they do work very well. I've even considered one for myself but I already have too many projects to complete

The RPi is somewhat of a revelation, for obtaining high-quality digital music replay, and when paired with a top-notch linear PSU (such as the Paul Hynes), it'll see off most 'badged' music streamers at many, many times its price, which for me is what it's all about: maximum SPPV!

I think the points you raise regarding the availability of spares and the question mark over the performance of old circuits are very valid. There are a number of interesting direct drive decks on the market now and it would be very interesting to compare them (though very difficult to get them all together. Of the top of my head there are:

The Kodo 'The Beat' The Brinkmann 'Bardo' and 'Oasis' models Yup, kind of proves that there's something in direct-drive 'done well', doesn't it, and how much the industry now has cottoned onto it? Back in the 'good old days' (questionable) of the Flat Earth, that certainly wouldn't have happened! Too much misinformation, ignorance and brainwashing went on, mainly in the media.

I've compared my T/T to a couple of the ones above, both of which lost (in every notable area you can think of), so much so that after hearing that happen, the owner sold them the next day!

That doesn't always happen, though....

I'd love to compare my own deck against any of the above, as I find such experiences educational, plus by putting it against such high-end competition, it's the only way of finding out if you're kidding yourself on about how good your own T/T is, and whether the £6k you've spent on it has been worthwhile!

I've only heard two of the above models myself, the Motus and the Bardo.The Beat and the Monaco are very rare things and only a couple or so in the UK.

The decks above use quite different approaches to achieving direct drive - some are very low torque and some use optical sensor feedback loops etc. I'm not sure that a handful of manufacturers proves anything very much (both VPI and Brinkmann make belt drive decks that sit above their direct drive designs - the other three only make the one design)). However, I do think that most drive systems (belt, direct, idler) can be made to work well if implemented correctly and made to a sufficiently high standard.
Mark
Top

Some lovely tables there. I have to admit I got sucked into the direct drive must be crap politics but Not able to tow the party line anymore as it conflicts with my overall philosophy of simpler is generally better!

I went to school in North Wales (Llandudno) beautiful place and where I heard my first LP12 in about 82.
Top

A few years ago I did quite a lot of experimentation with the view to implementing direct drive and if I had known then what I know now it may have succeeded. However, the concept of direct drive is simple in concept but far less simple to implement well.
Mark
Top
Post Reply
10 posts • Page 1 of 1

Return to “About The 'AudioFlat' Forum”