Today I attended a meeting of the Yorkshire HiFi Club. This event was hosted by David Brook of Brook Audio (and MCRU) at his premises in Huddersfield. Attendance was by prior appointment (though I only let him know yesterday) and about ten of us were there. The idea was to compare a number of different phonostages - ranging in price from £100 to £10,000. To this end David had set up an extremely expensive system in his custom built, and spacious, demonstration room. I don’t know exactly what I expected from David’s demo system but it certainly wasn’t what I found. First up was a pair of remarkable speakers: 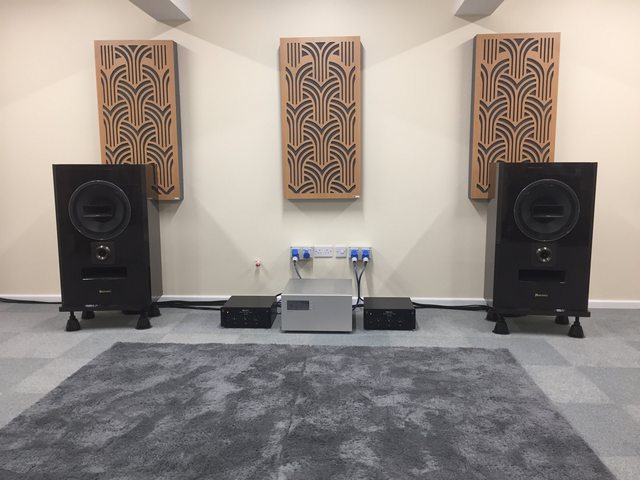 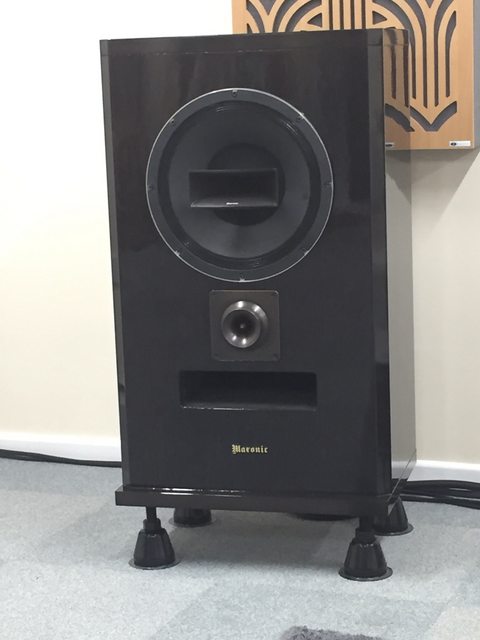 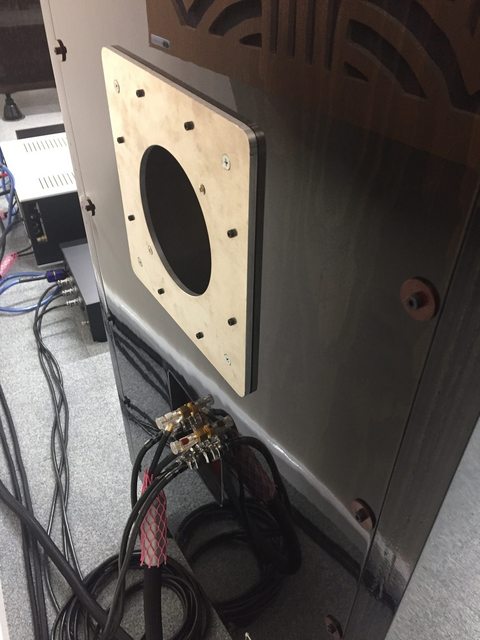 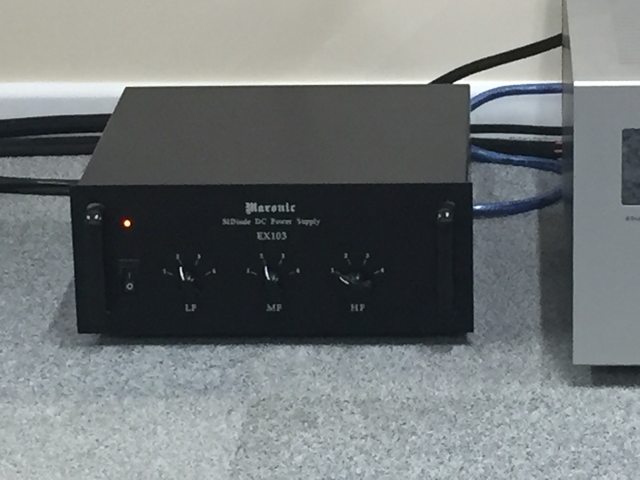 These are Maxonic TW1100 MK2 speakers. A Japanese three way design that uses all field coil drivers (very unusual) and have a claimed efficiency of 106 dB and a UK retail price of £75,000.00 per pair! The black boxes are not active crossovers (as I at first thought) they are the energisers for the field coil drivers - effectively the magnet in a normal drive unit is replaced by an electro magnet and so the strength of the magnetic field can be altered so suit ones taste and required level of damping. We didn’t experiment with this aspect but the speakers are certainly remarkably resolving with a very tight, direct and articulate sound. On the day they were quite dry sounding but they certainly allowed the differences in the many phonostages to shine through so it’s difficult to assign any particular characteristics to them without experimenting more with the proceeding components. I had never even heard of these speakers, never mind seen or heard a pair, so was more than a little surprised to see them in the dem room - ultra exotic as they are I’m sure these are the only pair in the UK - perhaps even Europe!

The amplification was supplied by the equally exotic Swiss brand Soulution. The power amp was the 711 stereo unit: 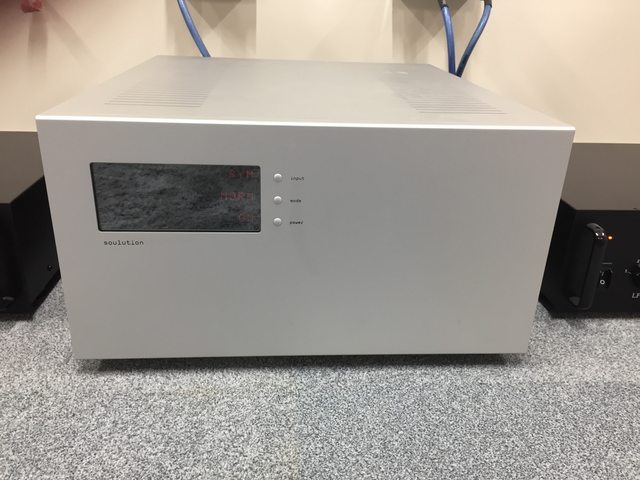 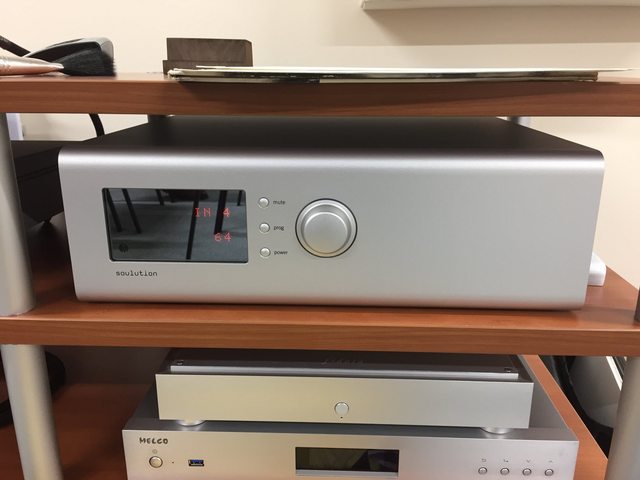 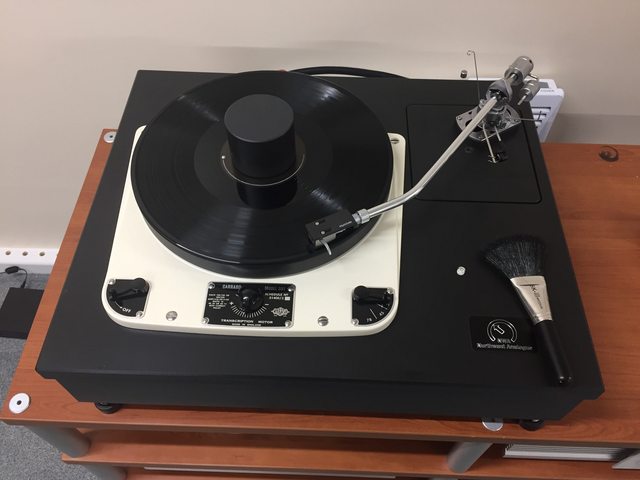 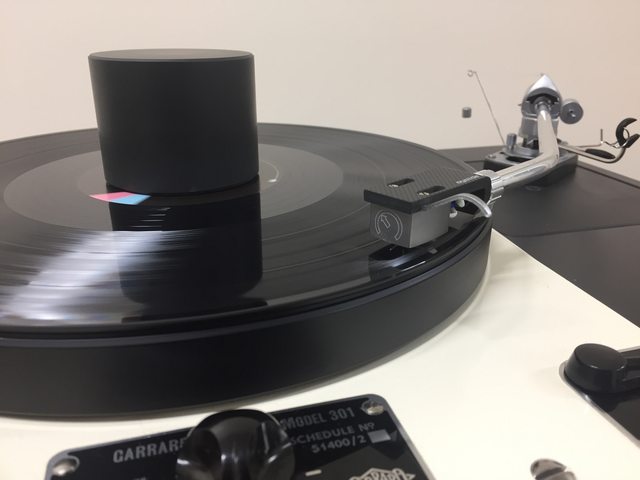 So, that is the introduction, in the next post the listening and my thoughts

Or an anagram of Marconi.
Top

Sorry, was distracted by the pub - it turned out to be a long day....
Mark
Top 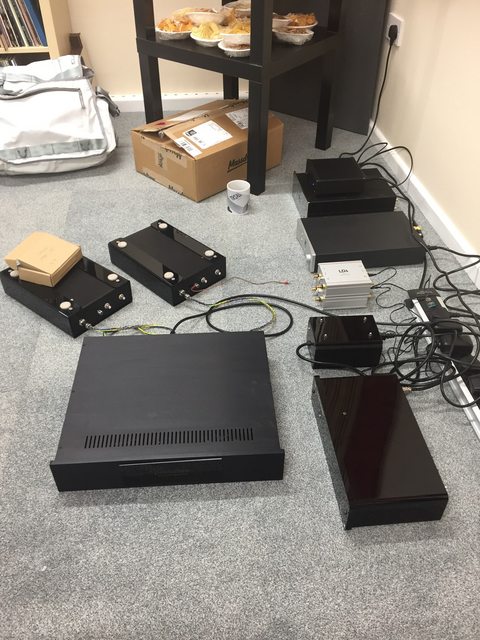 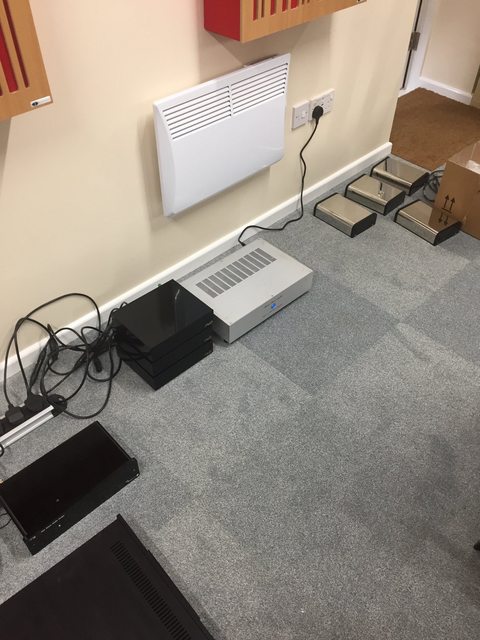 1st to play is a £200 Longdog Audio MM stage being fed from a Music First step-up transformer (this is the Classic V2 and retails for £2,450.00 + VAT - it is usually matched to their Reference phono amp). Quite a lot of hum - played a Dali demo record. A girl and acoustic guitar and then some violin - turns out this is Patty Griffin playing ‘Up to the mountain’ (I think?). Sound is smooth, but lacks a bit of bite and dynamic. There is some noticeable background hum which comes and goes quite randomly. Then a bit of opera (French), Maria Callas. Again, smooth, a bit flat in terms of perspective and the bass lacks texture.

I took this picture but later I thought this is actually the power supply for the turntable, so I’m not sure what this stage looks like 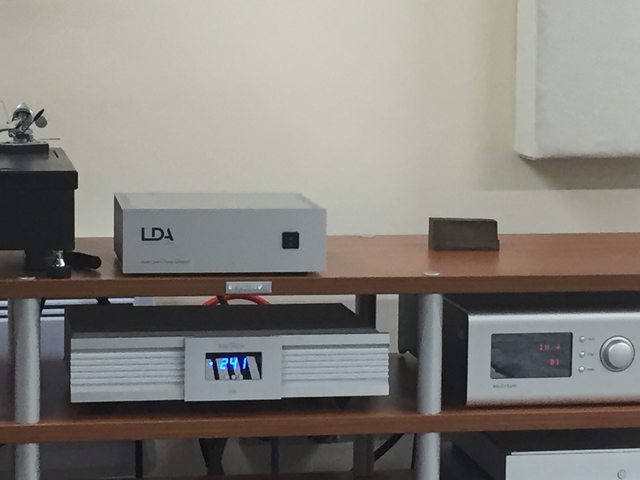 The music first step up transformer was replaced in an attempt to remove the hum and replaced by a £200 op-amp based head amp. This sounded even smoother and less dynamic. Then a jazz version of Fever. Bass is plummy but lacks tonal differentiation and dynamic swing definitely sounds restrained. Leading edges are smooth rather than snappy. Soundstage is rather flat but most are sins of omission.

2nd was the Cambridge 651P phonostage £120.00. The Patty Griffin was less dynamic again but I felt some of the instrumental timbre was better. Then the Pink Panther theme - a bit lack-lustre in dynamics and also a bit comb and paper in the horns. 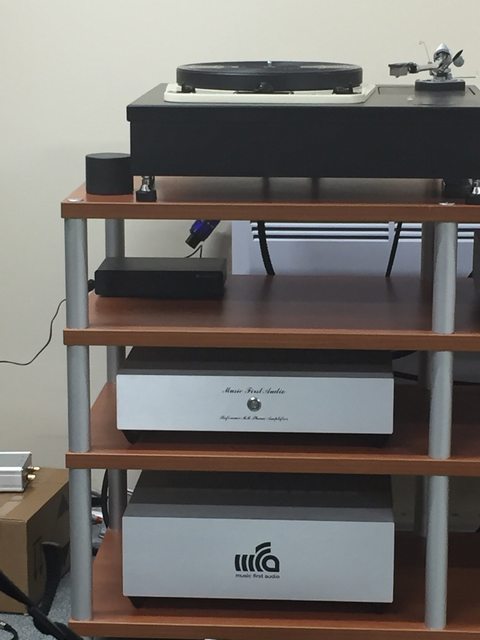 3rd was a PS Audio PS4A. This is quite an old design and long now discontinued. Patty Griffin had more space to the sound and the whole sound was a bit weightier - separation was also better. Hum from the speakers is really quite pronounced. Then Stevie Ray Vaughan - bass sounds detached and a bit overblown. I’m not impressed by the attack or dynamic. On further listening the large scale dynamic is pretty good but the micro dynamic is nothing special. However, the best so far. 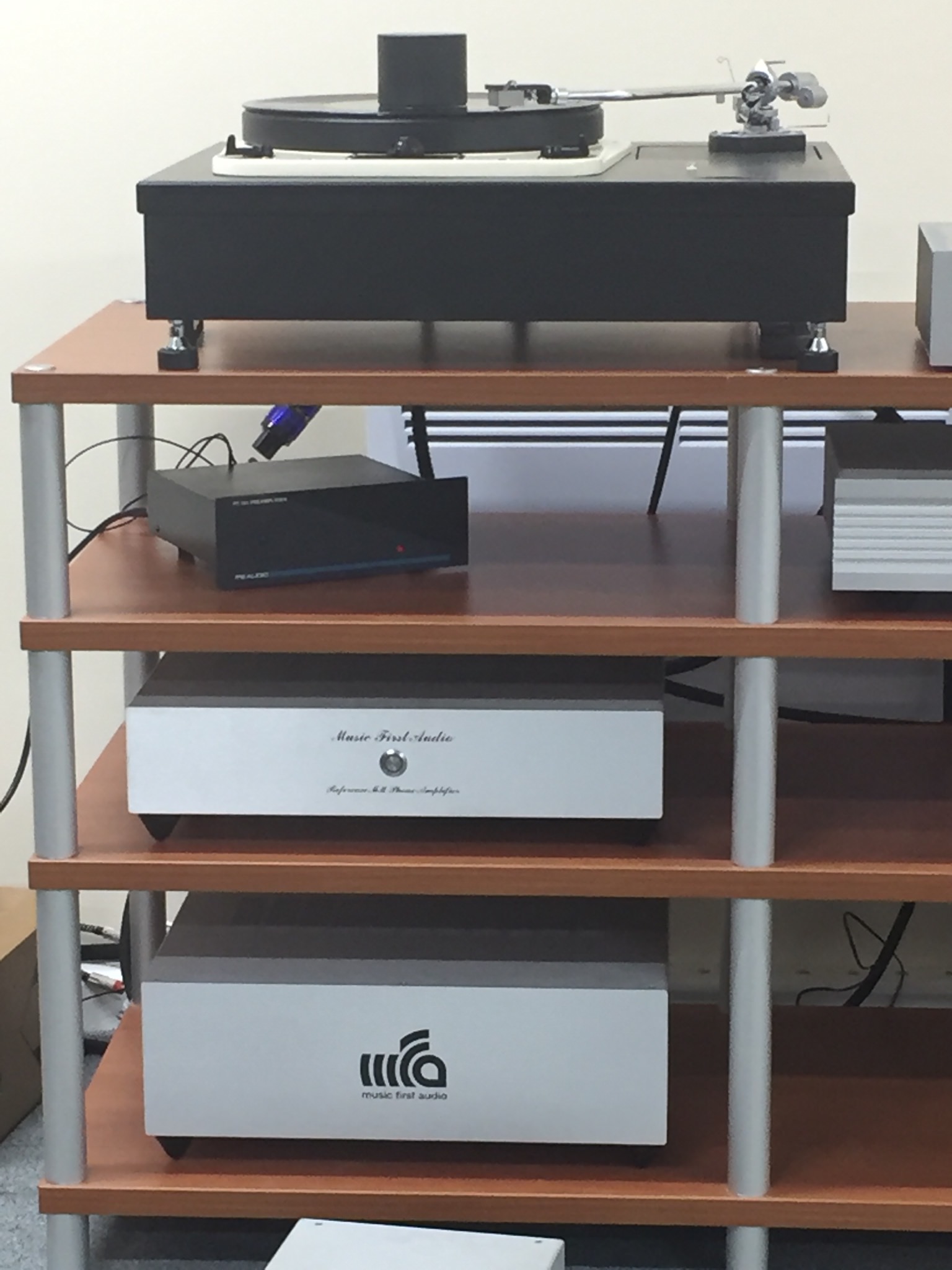 4th to be put through it’s paces was a new Jfet design by Longdog Audio that will sell direct to the customer for £1350 to £1500 (yet to be finalised). Similar to the PS Audio but bass is more nuanced. In fact the whole sound has better range of inflection. Yello - Flag was up next. This definitely sounded like it was playing too fast and was very oddly undynamic! However, there was, overall a step change up here from the proceeding designs. 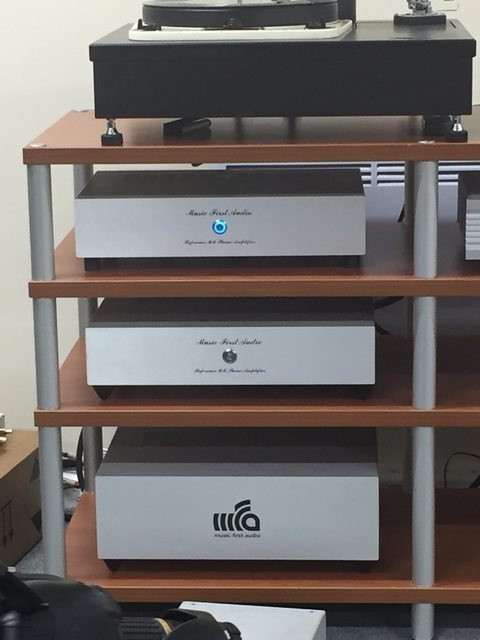 It’s the unit with the blue button - ignore the others.

5th up was an NVA phono 2 equipped with two power supplies - it’s ultimate iteration. This has, by far, the lowest output and the NWA cartridge doesn’t seem to have enough output for it and even at full volume it is a bit quiet on the Stevie Ray Vaughan track. I think it sounds pretty good, but I really want to turn the volume up! Because of the volume issue it’s difficult to really say how this unit compares. There was some debate about raising the output of the amplification but there was already quite a lot of transistor noise from the unit and it was also picking up noise from people’s phones. As we were still nowhere near the end we decided to push on. 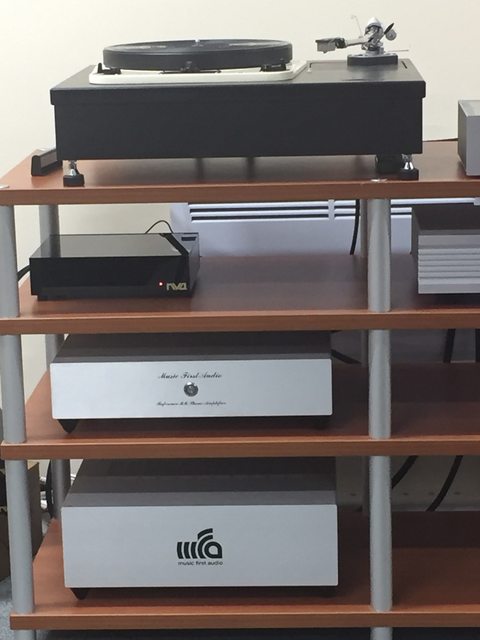 The two power supplies were on the floor next to the audio rack. This is a very recent sample owned by David Brook.

6th was a Tom Evans Anniversary costing something like £2000. I was getting tired by now and the slightly soporific nature of this design almost had me nodding off. However, on the Stevie Ray Vaughan the bass acoustic was the best so far. 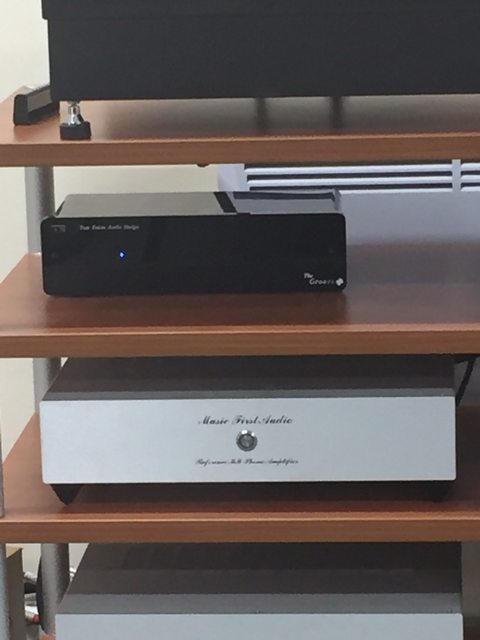 7th was a tiny design by Clones Audio (retail price unknown). My notes say it was very melodic on John Lee Hooker. Then we played a bit of Amused To Death by Roger Waters. This sounded a bit congested and the upper bass sounds thin, or the upper mid sounds emphasised. When the music approaches climax it all becomes rather pinched verging on painful. 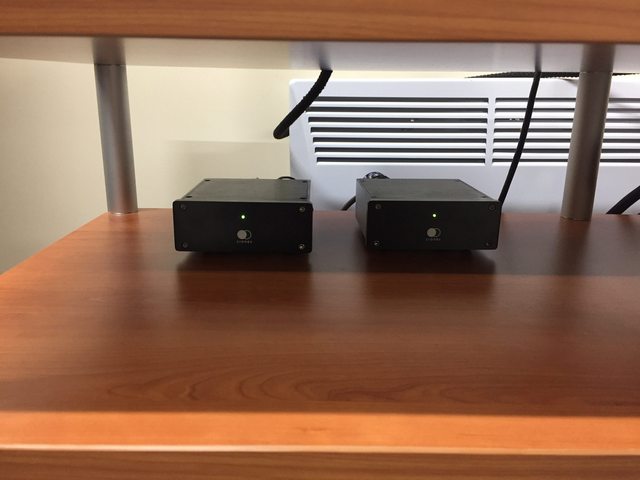 8th was a Modwright SWP90SE. This is now discontinued but is thought to have sold new for arround £3,500.00. Immediately I think it has that tube ‘glow’ in the mid, almost like added reverb. Probably the most dynamic so far. A big bold sound, strongly projected but perhaps a bit diffuse in terms of stereo focus. This stage was very popular amongst the gathering. Jeff Buckley - Halelulia is atmospheric and moving. 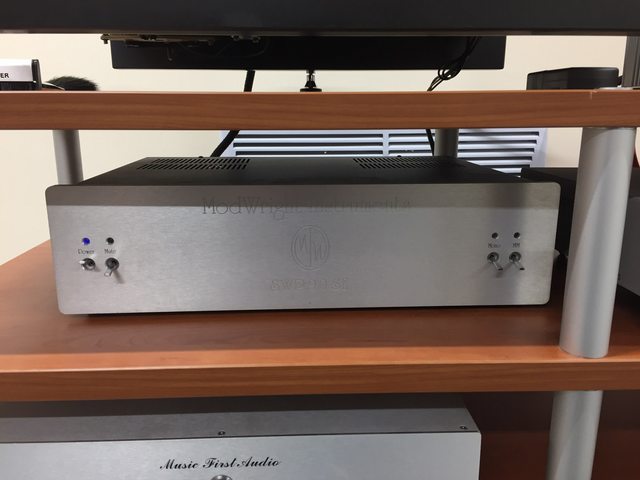 9th to do battle was the Paradise. This is a DIY design and costs in the region of £1,800.00. This particular unit belongs to my friend Simon but I also use one of these (though mine is a four box, rather than three box, unit). The Patty Griffin has the most tonal variation and the guitar has a distinct woody tone, abscent from previous listening, and is also and the most focussed within the soundstage. Next up was Yellow ‘The Race’ which sounded much more dynamic than previously. The many multitracked elements all stood out independently of each other. Much deeper bass too. The stereo image is focussed and strongly positioned. People were really liking this and the atmosphere in the room went from tired to energised. Next up someone put on the soundtrack to the film Bullet and the orchestration was super wide. Then we played Nils Lofgren ‘Acoustic Live’ and the timing is extremely tight and the tonal inflections just right; acoustic of the space is really clear. A couple of people express surprise at how much better this is than everything that preceded it - I’m biased, but they are right (and obviously so). 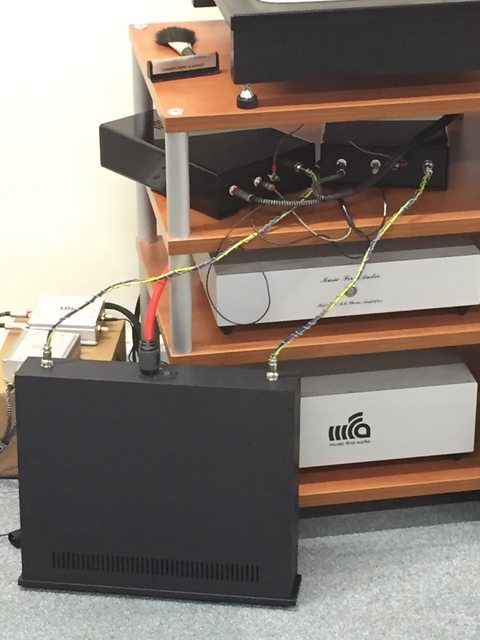 10th is the brand new Jez Arkless (Arkless Electronics) stage. The price isn’t yet set for this but, so far, £2,000.00 has been suggested. On the Nils Lofgren it doesn’t sound quite as subtly nuanced, in the timing sense, (than the preceding Paradise) but it does sound very dynamic and there is great clarity. Even better detail than the Paradise and very popular with those listening. Some people were actually shocked at the performance available though some preferred the Paradise. Overall the Arkless and the Paradise are very close which isn’t surprising as they use a very similar circuit concept (transconductance). I had just had this unit at my house for a night and I was very impressed with it. If my Paradise were taken away I would certainly have this to replace it. 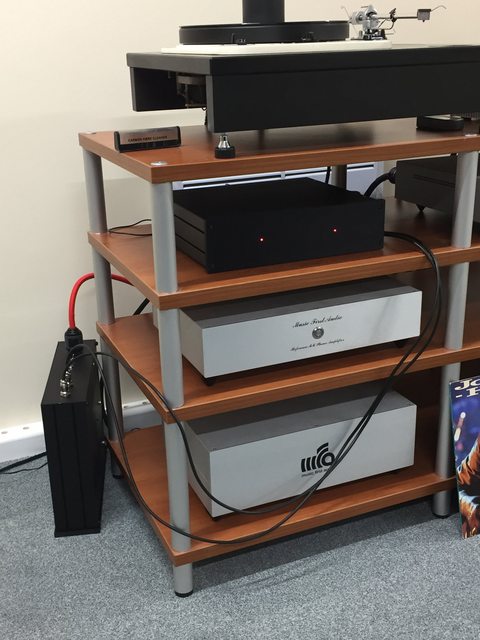 The matching power supply is on the floor next to the equipment rack (face down) it looks exactly like the other unit.

11th, to round everything off we plugged in the Music First Statement unit with matching step up transformer - in cost terms this is a £10,000.00 MM stage with an additional £3,000.00 step-up transformer. It’s certainly big and bold. I don’t think I find it quite as subtly nuanced as either of the last two (which is a bit disappointing) but it is very dynamic and projects strongly. It certainly doesn’t have quite the focus of the Paradise but then none of the other stages do either. Overall I’m a bit disappointed. The big brush strokes are amazing but the filigree detail is not as good. 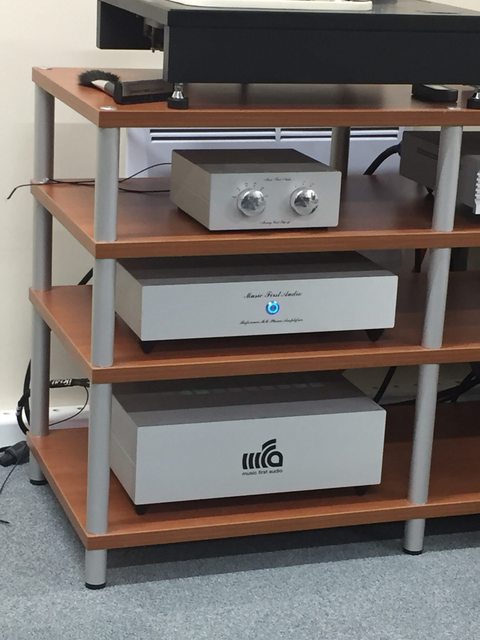 Overall I have to say this was an outstanding event. A very genial host in David Brook (Brook Audio) who was very fair in his treatment of all the equipment and didn’t attempt to promote any agenda of his own - all I can say is a huge thank you for letting me attend and I would certainly be happy promoting the Yorkshire HiFi club in future*. Also, many thanks to all those who attended and made it such a pleasant, and informative, experience

* I believe the Yorkshire HiFi Club meets every other month at David Brook’s shop in Huddersfields town centre - well worth attending it is too.
Mark
Top

I spy a foo mains lead connected to my phono stage! It was carefully optimised during long subjective testing for Aldi and B&Q cables and will have been severely compromised by the use of any other brands

Si actually brought a standard mains lead specifically - but the socket was too far away so we were obliged to use the ones provided (I don’t know what is was exactly).
Mark
Top

YNWaN wrote: ↑
Sun May 27, 2018 4:45 pm
Si actually brought a standard mains lead specifically - but the socket was too far away so we were obliged to use the ones provided (I don’t know what is was exactly).

I believe that's a length of B&Q's speciality lawnmower mains cable. Highly regarded for its natural sound and open window acoustic capability. Whatever it was it did the trick.
One more Paradise left to complete.
Top

I’ve been mulling over the NVA issue. It seems strange that it didn’t provide enough gain as none of the other stages had this issue. We (the various people at this event) did quiz the NWA team about the output from their new cartridge (a total unknown to all others present) and we were told it was 0.35mV. This makes it a low output cartridge but not not super low output - my own cartridge only outputs 0.2mV and some Audionote cartridges (for example) are even lower. However, the NWA guys were a little vague as to how the stated 0.35 figure was arrived at so it’s possible the output is lower - it’s also possible that this isn’t the case at all....

The NVA design has no user adjustments of any kind (it’s not alone in this) so there was no option to raise the gain or experiment with it further.
Mark
Top
Post Reply
52 posts