Thanks Dan. Very time consuming as everything including new rear panels has to be custom made (and veneered). I under-estimated the time on this work but hey, I enjoy the work so will learn for next time! The Noble pot values have thrown me somewhat. They don't sum as claimed (by Yamaha) despite cleaning. I'll remove and test the next set and check them.

Lots of work to do yet on the crossovers. Once I have the first speaker back together today, I'll redo measurements, this time for individual drive units and import into VituixCAD to build the crossovers as constructed in simulation. Then it's a matter of fine tuning in sim before revising as needed for best response.

For comparison with switches fitted to other NS1000's these are the values measured to the nearest 0.1 Ohms for the cleaned switches from the first cabinet (thoroughly soaked in switch cleaner and worked for several minutes):

These figures on the normal setting will shift crossover enough to affect phase if the crossover was first designed and then the switches introduced. Even if that wasn't the case and they were designed insitu with the circuit, clearly both the step in response at each setting plus the impedance variation are enough to skew crossover.

Initial guesstimates (worst case from above) suggests crossover between mid/LF could shift by as much as 350Hz between -3 and +3 settings! That's very significant in terms of phase and may explain the audible smearing of bass detail at some switch settings. It also explains why there was a little crossover harshness at the mid to HF crossover.

This is why switches in crossovers are not a great idea. It will be interesting to see what the other ones sum like.

by reffc
Here's the first simulation run based on measurement of existing crossover but with revised L-pad values to tie L-Pads to actual impedance values at crossover points. Much improved response! Inversion of polarities shows deeper nulls at crossover confirming that the switches were badly messing up response: 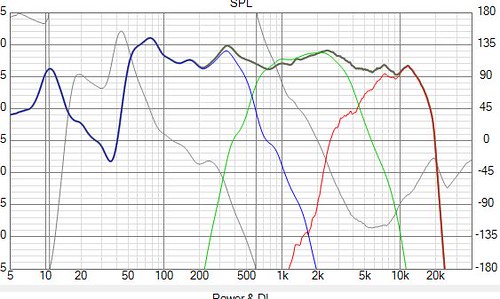 by ChrisOH1
Blimey, you're up early Paul. Can't wait to hear these, amazing job.

by reffc
It's taking a lot longer than I'd like Chris so I have to put in the hours.

Progress of sorts. One new crossover wired up to the speakers and a measurement on tweeter axis taken from 1m in a partially treated room.

What I'm ideally looking for is a drop from the low mids to the HF of about 4 to 5dB. Flat in-room isn't right as this would be raised LF to HF anechoic and would be fatiguing longer term at volume.

First effort uses Mark's suggested L-Pad levels and isn't too shabby. With a few tweaks to inductor values (and they were only minor) the LF to mid crossover has improved and overall response is very smooth:

by reffc
And here we have the refined final version showing in-room 9dB LF peak to HF which is pretty much textbook for a room with lots of soft furnishings:

This sounds much better, If you cover the tweeter, there's an immediate loss of atmosphere but the tweeter now sounds far better blended.

I've since done one final tweak to raise the HF a smidgen, perhaps 1 or 2dB.

For anyone who would like to replace their switches (which is to be recommended!) the L-Pad values I've adopted for the smoothest response are:

This provides a close match to anechoic flat or HF down around 8dB from LF peak and Mids down a little less. The HF then rises again by 5dB by 11KHz which offers some needed F-M compensation for average listening levels. If you adopt these values you help restore better phase relationships between drive units, especially bass to mid which I suspected was out when I saw some on-line measurements and confirmed on listening tests. Bass sounds cleaner and tauter now (Bass inductor DCR reduced from 0.4 to 0.25R and power handling before saturation increased). It is also lifted wrt mids and HF which makes the speakers sound more lively in the bass region now.

Pot vales by comparison with "Speaker A" were very closely matched and were within 5% of those values for each position.

This means that it wasn't dirty or faulty pots to blame for the odd readings, but the fact that the values are plain wrong to act as a true L-Pad at any setting for either control in both speakers. Hence crossover varies with switch position = variable phase response also.

The value of the L-Pad is determined from 1) the measured impedance of the drive unit for the frequency at which it is crossed over, and 2) by the amount (in dB) of attenuation required.

In the event that the drive unit is doing band pass duties, as the mid is, then you use the impedance value at the lower end (lowpass filter end) of the impedance curve.

In order that levels are matched, response must be lowered to match LF response so "Normal" should equal the response at which, combined with LF response at the crossover frequency, the two match. In this case, the correct value, as tested should be for the mid (speaker B) about 5.4 Ohms series and 4R7 parallel to level match (a far cry from 3.6/22.1!). No wonder some people can find these a little bright or dry with the mids projected so much!

by karma67
With that in mind do you have a ball park area to set the levels at?

by YNWaN
Well I think Paul’s point is that you can’t actually achieve the flattest response no matter how you adjust the L-pads. Even if you get close there are phase anomalies. All this makes complete sense to me and does support my subjective experience in that I found too much adjustment of the pads did weird things to the cohesion of the stereo image.

Also, I was talking with a couple of friends last night and concluded that Paul is right to say my suggested resistor values produce something of a mid forward balance and I think this is a balance I personally gravitate toward.

I am going to try the values Paul recommends - hopefully, for experimentation, I can crocodile clip some extra on - I can’t remember the values I recommended now so will have to check....

by YNWaN
It’s interesting looking at Paul’s plot of the FR when using my suggested resistor values. Of particular note is Paul’s Reference to adjusting inductor values by a minor amount. When I changed over to driving my bass drivers actively, from a dedicated electronic crossover and amplifier, I did change the bass drivers crossover frequency - I changed the operation to a steeper third order and moved the knee point slightly higher in frequency. I also inverted the phase (I think - it was quite a few years ago now). The subjective effect was to remove a ‘bloom’ from the upper bass that masked tonal detail compared to the mid and, to my ear, improved integration between the mid and bass.
All times are UTC+01:00
Page 9 of 13